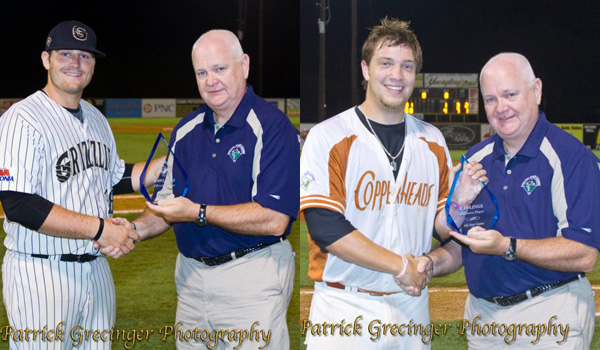 The National CPL All-Stars took an early 2-0 lead in the bottom of the second inning and never looked back, as they rolled to a 4-1 victory over the American CPL All-Stars in the 2012 Coastal Plain League All-Star Game Monday night.

Martinsville’s John Faircloth (Charleston Southern) led off the bottom of the second with a walk. One out later, he stole second, and then advanced to third on a single to left by Thomasville’s Kyle Brandenburg (High Point). Brandenburg then stole second, and a throwing error by Gastonia catcher David Reid-Foley (Mercer) allowed Faircloth to score, while a fielding error by Fayetteville center fielder Mike Tauchman (Bradley) saw Brandenburg reach third. One out later, Columbia’s Joshua Miller (USC-Aiken) singled down the right-field line to score Brandenburg and make it 2-0 National All-Stars.

In the bottom of the third and Petersburg’s Ryan Parker (Seton Hall) on first, Gastonia’s Tyler White (Western Carolina) connected on an RBI-double to left-center, scoring Parker. Next, Edenton’s Spencer Branigan (Pennsylvania) singled to center, moving White over to third. Then, Asheboro’s Hunter Ridge (UNC Wilmington) hit an RBI-single to right field, scoring White to give the National All-Stars a 4-0 lead.

The American All-Star squad got on the board in the top of the fifth inning. Fayetteville’s Sal Giardina (Lynn) singled through the right side with one out and then advanced to second on a walk by Florence’s J.D. Crowe (Auburn). One out later, Wilmington’s Alex Freedman (Lynn) singled to center, advancing Crowe to third and scoring Giardina to make it 4-1.

Petersburg left-hander Alex Caravella (Pittsburgh) earned the win after going one inning of work and striking out two of the three batters he faced. Meanwhile, Forest City righty Ryan Tezak (West Virginia) was tagged with the loss. In one inning of work, he surrendered two runs - one earned - on a pair of hits, walked one and struck out two.

Immediately following the award ceremony, the remaining All-Star pitchers were able to throw in front of the scouts - and fans - in attendance so as to ensure all CPL All-Stars were recognized and scouted.