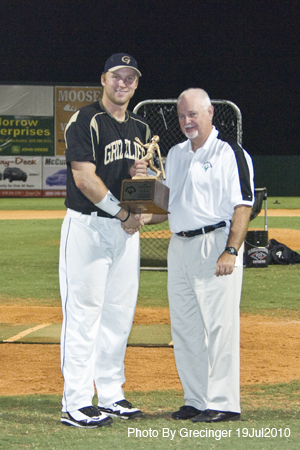 It started off slow, but heated up quickly; and in the end Gastonia’s David Chester (Pittsburgh / photo courtesy of Pat and Brandon Grecinger) hit 11 home runs to be named the Rawlings All-Star Home Run Derby Champion for 2010.

Chester was able to fight off a solid effort by Edenton’s Brian Billigen (Cornell), who finished with six long balls, all with wood, for 18 points. Ten of Chester’s 11 homers were hit with wood - each worth three points - while one was added for good measure in the first round with an aluminum bat for one point.

In the second round, Billigen and Florence’s Ronnie Freeman (Kennesaw State) tied, which forced a swing-off. Each was given five outs, and Billigen advanced after connecting on three bombs to Freeman’s zero.

Below is a complete run down of the 2010 CPL All-Star Home Run Derby: