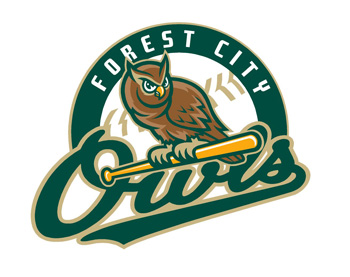 McNair Field, the home of the Forest City Owls, will host the 2010 Coastal Plain League All-Star game.  The event will begin with an All-Star Fan Fest and Home Run Derby on Monday July 19 and conclude with the All-Star Game on Tuesday July 20.  Forest City will host the event in the team’s third season in the league. The 2010 CPL All-Star Game logo is being created and will be announced soon.

The event will begin with the All-Star Fan Fest Monday July 19 which will allow fans to meet the CPL All-Stars from both teams and watch the teams’ batting practices.  The Home Run Derby is the centerpiece of the evening and will feature the league’s 16 best hitters in the annual contest.

The All-Star players and coaches will be treated to a lunch on Tuesday before participating in an afternoon of workouts for professional scouts.  The All-Star game will take place that night, beginning at 7:05 pm.

“We’re very excited to announce Forest City as the host city for our 2010 CPL All-Star Game,” said league President and Commissioner. “Ken (Silver), James (Wolfe), Denise (Holland), and their staff have done such a wonderful job with that franchise that bringing the All-Star event to McNair Stadium seemed like a natural move. Wilmington did a great job with the event in 2009, and we look for the Owls to add their touch to the All-Star Game in 2010. Overall, we think it will be very successful!”

“We are tremendously honored to host this year’s All-Star Game” said Owls general manager James Wolfe.  “The cities who have hosted the event in the past have done a tremendous job, and we have a lot to live up to.  This is a great opportunity to showcase our facility and fan support, and we look forward to giving the people of Forest City and Rutherford County a first class event.”

The event marks only the third time the All-Star Game has been hosted by a West Division city; Gastonia hosted the game in 2003 and Asheboro in 2008.  It is also the first time that a defending Petitt Cup champion has hosted the event.

The Forest City Owls are the 2009 Coastal Plain League Petitt Cup Champions.  The Coastal Plain League is the nation’s hottest summer collegiate baseball league, heading into its 14th season. Featuring 15 teams playing in North Carolina, South Carolina and Virginia, the CPL gives college players the chance to refine their skills with wooden bats during the summer months. Players are housed with local host families for the summer and past experiences have been very positive for both players and hosts. For more information on the Coastal Plain League, please visit the league website at www.coastalplain.com.